The last class of students who experienced the 2008 Tea Fire celebrate their graduation and the college’s 75th anniversary.

Under blue, sunny skies, about 4,000 guests cheered 314 graduates at Commencement May 5. A grove of still-charred eucalyptus trees in the distance reminded seniors of the devastating Tea Fire in November 2008, which forced them to evacuate to the gym. Speakers recalled the bond the class of 2012 developed during that long night.

The seniors witnessed a transformation as the college rebuilt after the fire and added new facilities, including Winter Hall for Science and Mathematics and Adams Center for the Visual Arts.After living through the fire and construction, they enjoyed the benefits of beautiful new buildings.

During the ceremony, President Gayle D. Beebe presented Chad and Ginni Dreier with the Westmont Medal to honor their service to numerous organizations that benefit children, education, literacy and health-related causes.“ Chad and Ginni are two of the most generous, kind and loving human beings I have ever met,” Beebe said.

A Los Angeles native, Chad is the former president, chief executive officer and chairman of the board of the Ryland Group, the seventh largest U.S. developer and builder of homes. He serves as chair emeritus after 13 years as chairman of the Loyola Marymount University Board of Trustees. A co-chair of the Women’s Leadership Council at LMU, Ginni serves or has served on the board of directors for the National Museum of Women in the Arts, the Santa Barbara Zoological Gardens, the Restless Leg Syndrome Foundation, and the Santa Barbara Bowl Foundation.

Nancy Ortberg, leadership development director at Menlo Park Presbyterian Church, delivered the address, “Here, There, Now and Then.” A management consultant and founding partner at Teamworx2.co, she served as a teaching pastor for eight years at Willow Creek Community Church in Illinois and has written two books. Her son, John, graduated with the class of 2012. 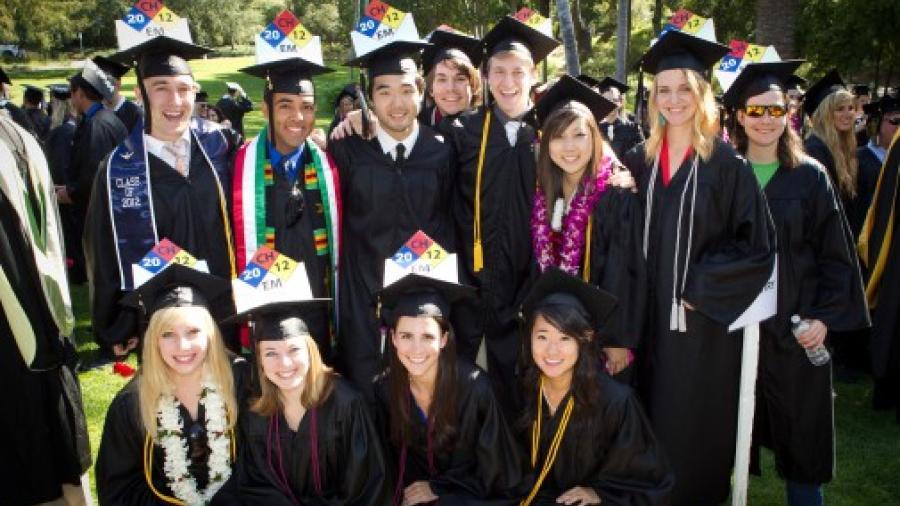 Outstanding graduates included chemistry major Elijah Tylski, who earned the Faculty Scholarship Award for the highest cumulative GPA. Kate Stewart (cross country and track and field) and Coby Cress (baseball) earned the Dean’s Award as the outstanding male and female student-athletes. Kate graduated with a 3.86 GPA and a degree in biology; Cress majored in economics and business and earned a 3.95 GPA. Kelsey Santoro received the Dave Dolan Award for her service as co-director of Potter’s Clay and residence assistant in Armington Hall. Melissa Christensen and TJ Breshears accepted the Kenneth Monroe Award for their achievement as excellent students and effective leaders.

Members of the class of 1962, the Golden Warriors, celebrated their 50th reunion May 4-6, and 42 marched in the Commencement procession with the seniors.

For more photos and videos of the speakers, visit the commencement page.