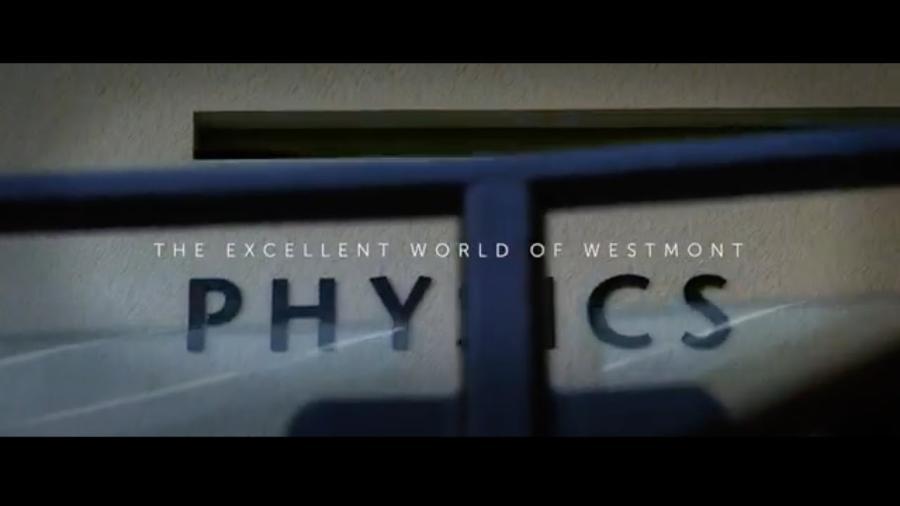 When you study physics, you seek a fundamental understanding of the physical universe.

You’ll also take courses in mathematics, the language of science, and chemistry for scientific breadth. Test some of the theory you learn in laboratory classes and hands-on research and take advantage of opportunities to conduct research with you professors. State-of- the-art instrumentation enriches your experience. You may also pursue internships with high-tech firms in Santa Barbara. Such practical training prepares you for graduate school and professional work in science, engineering and related fields. Interested in a double major? Take the B.A. track for greater breadth and flexibility.

Searches for new fundamental particles at the Large Hadron Collider

A mechanical design engineer with extensive experience in CAD and prototyping

Assistant to the Mathematics/Computer Science and Physics/Engineering departments

See career paths for graduates who majored or minored in physics at Westmont.

Congratulations to Kirsten Potts, who has been awarded a US ATLAS SUPER award to work with Dr. Ben Carlson on ATLAS research during the summer of 2022. The title of Kirsten's proposed project is: "Search for low mass diphoton resonances with MET & triggers for photon + MET with machine learning." The award consists of $5,000 of stipend for Kirsten, as well as the opportunity to present her work at the end of the summer along with other students in the SUPER program.

A Westmont researcher has won a grant to further his search for evidence of the presence of mysterious dark matter. The National Science Foundation (NSF) has awarded a $200,000 grant to Ben Carlson, Westmont assistant professor of physics, to continue his work on the ATLAS experiment at the Large Hadron Collider (LHC) at CERN, a particle physics laboratory in Geneva, Switzerland.

In the next step for his research, “Casting Light On a Semi-Visible Higgs Boson with Novel Triggers at ATLAS,” Carlson seeks evidence for physics Beyond the Standard Model (BSM), which might account for the presence of dark matter. Researchers say dark matter, which doesn’t appear to interact with the electromagnetic field, may account for about 85 percent of material in the universe. It’s extremely difficult to detect because it does not absorb, reflect or emit electromagnetic radiation including light.

Funds from NSF and other agencies around the world built the LHC machine and ATLAS, a large particle detector facility, as basic science tools. “The 2012 discovery at the LHC of a Higgs boson with mass close to 125 GeV, about the mass of a tungsten atom, represents both the crowning achievement of the Standard Model of particle physics and a hint beyond it,” Carlson says. “How can a light Higgs boson possibly survive huge, destabilizing quantum effects without new, undiscovered physics?”

The LHC recently started its third operational round at higher energy and increased event samples. Carlson says it’s possible that evidence for BSM physics could emerge in the next few years.

The grant allows Westmont’s undergraduate students to participate in the analysis of the LHC data and explore new machine-learning techniques. Two Westmont students, Sean Ryan '24 and Chandler Baker '24, are working in Geneva on collecting data with the ATLAS detector as part of summer research that Carlson oversees.

The NSF, an independent federal agency with a budget of $8.8 billion in 2022, promotes the progress of science and keeps the United States at the leading edge of discovery.

Daniel Staples ('21) came to Westmont as an avid lover of art, science, and the outdoors. While at the college Daniel pursued his passion for the former two fields by double-majoring in Art and Physics. His contribution to the Westmont Graduate Exhibition, The Dark Ages, connected imagery from plague doctors of the past to the current feelings of frustration and confusion felt during the current COVID-19 pandemic. He was also actively involved in a research project in nuclear physics during his senior year under the direction of professor Robert Haring-Kaye, presenting a poster of his work at the 2021 Westmont College Student Research Symposium. His results are expected to contribute to a peer-reviewed publication in an internationally-recognized journal. Daniel currently enjoys hunting and working at an IT company with his father near his home in Montana.

Chisondi Warioba ('21), originally from Tanzania, moved to California when he was seven years old where he lived with his father and adoptive mother. Fueled by a passion for medicine, Chisondi initially chose Westmont to pursue a degree that would lead to medical school. By the time he graduated, Chisondi was one of only four students in his class who completed a triple major (Chemistry, Biology, and Physics). Not only did he excel at academics and research while at Westmont, he also assumed a leadership role in advancing racial justice and reconciliation, leading the Black Student Union his junior year and organizing discussion panels for Residence Life events centered around these and other social issues. At the 2021 Commencement exercises, Chisondi received the Dave Dolan Award in recognition of his leadership in responding to the social and spiritual needs of the college. Chisondi is currently pursuing a PhD in Medical Physics at the University of Chicago.

Aria Hamann ’16 received a prestigious graduate research fellowship from the National Science Foundation to support her doctoral studies in engineering and applied science at Harvard University in the fall. In 2016, she also earned a Fulbright Scholarship to conduct hydrology research at the Delft University of Technology in the Netherlands. She worked on an independent research project to simulate Managed Aquifer Recharge, a promising method of securing a consistent freshwater supply for subsequent recovery or environmental benefits.

Jesse Cozean ’07 majored in physics at Westmont and works for medical device companies his mother, Colette Day Cozean ’80, has started. He is vice president of research and development at Innovative BioDefense Inc. and Abela Pharmaceuticals, and he spends much of his time in the lab. At Westmont, he learned to think through problems and persist until he solved them, which helps in developing new products. He has also written a book “My Grandfather’s War: A Young Man’s Lessons from the Greatest Generation,” which documents Robert Cozean’s ordeal in a German camp.