...and Reinvigorates the National Advancing Women in Leadership Conference.

The threat to cancel the national Advancing Women in Leadership (AWIL) conference this year led to its redesign as a virtual event. Westmont’s success with virtual events in 2020 convinced Irene Neller, vice president for enrollment, marketing and communications, to quickly lead with action. A Women’s Leadership Task Force commissioned by Shirley Hoogstra, president of the Council of Christian Colleges and Universities (CCCU), unanimously selected Westmont to serve as host for the first-ever virtual conference to continue the momentum with the sixth annual AWIL.

“What an opportunity for Westmont to host the sixth annual AWIL Conference in partnership with the CCCU,” said Dominique Loftus. “I was thrilled to innovate and reinvent the conference as a virtual platform. We knew it was an opportunity to extend the events to a global audience.” Loftus, a 2015 Westmont graduate and an events manager at the college, helped form a dream team and quickly got to work with less than six weeks to pull it off. 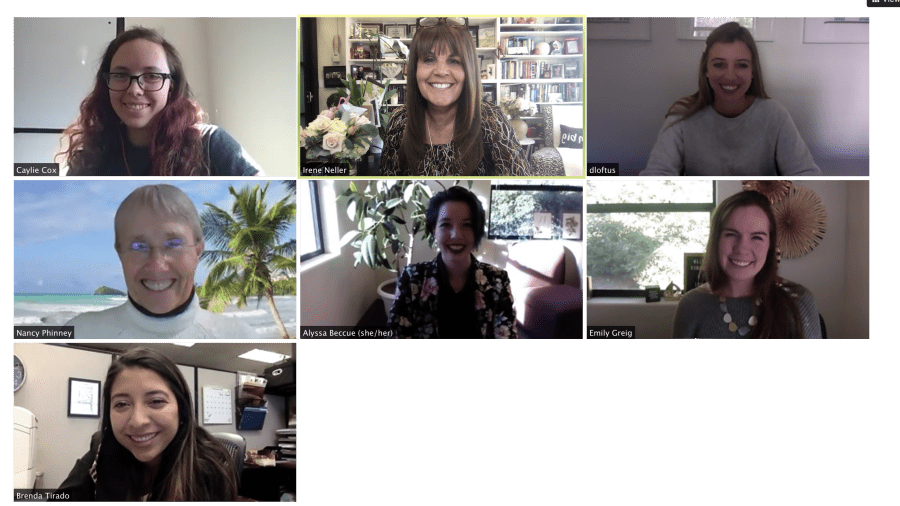 "Thee Dream Team" pulled off the event in less than six weeks. Top left to right:

Since 2016, Christian colleges and universities in California have taken turns hosting a day to recognize, celebrate and inspire the advancement of women of all ages through education. The conference, held each March, recognizes women’s history month. Westmont has participated each year, sending more than 40 staff, faculty and students as delegates, conference speakers and attendees.

Pepperdine University hosted the inaugural AWIL conference in March 2016 following dialogue at the CCCU June 2015 Women’s Advanced Leadership Institute (WALI) at Cedar Springs Christian Retreat Center near Sumas, Washington. The retreat-based program, by invitation only for 40 women in leadership from CCCU institutions, focused on cultivating and preparing the next generation for leadership. “The pipeline and pathway to support women into leadership positions at CCCU schools was lethargic, at best, and not done well,” says Neller, who serves on the CCCU women’s leadership task force and chairs AWIL.

National statistics of women in leadership reveal discouraging trends. Through the decades and across most sectors of societies worldwide, women continue to be significantly underrepresented in senior leadership roles. For example, among the top 500 U.S. corporations, women hold only 5.8 percent of chief executive officer positions and only 21.2 percent of board seats (Catalyst, 2020). In higher education, data reported by the American Council on Education document that women held 30 percent of college and university presidencies, up only 4 percent from 2011 (American College President Study, 2017). Across the 180+ CCCU institutions, 12 (about 7 percent) had women presidents as of fall 2019, whereas women students make up more than 60 percent of the collective enrollment of these institutions.

“Something needed to take shape intentionally to inspire and encourage more women who could also serve as role models and mentors in leadership positions on our campuses,” Neller says.

The WALI group became passionate about preparing the next generation of women leaders and initiated a nationwide effort through an annual conference hosted by CCCU members to observe March’s National Women’s History Month. Neller, one of the founding visionaries at the 2015 WALI retreat, has been a lead architect of the annual AWIL conferences since then. “We sought to raise awareness of the underrepresentation of women in senior leadership in Christian higher education and to prepare women of all ages and at all career stages for professional advancement, influence and impact,” she says.

“For the first time, we included AWIL satellite sites around the country to initiate an online sisterhood of women who share this vision but have been unable to travel to California and attend in person,” Neller says. More than 2,000 registered for Westmont’s Lead with Action virtual events.

When Nancy Khoen, Harvard historian and bestselling author of “Forged in Crisis: The Power of Courageous Leadership in Turbulent Times,” agreed to speak at Westmont’s President’s Breakfast March 5, Neller saw an opportunity for Westmont to serve as the virtual host for AWIL. The CCCU and AWIL task forces unanimously and enthusiastically supported the idea. President Gayle D. Beebe was delighted to combine both events, bringing in 3,000 registered participants, another historic number, for the college’s annual breakfast, also delivered virtually this year. Nancy Koehn’s talk on lessons from five masters of crisis management kicked off the month’s focused activities on Lead with Action. A second event on March 26 addressed inclusive diversity leadership in action and featured CCCU’s Kimberly Battle-Walters Denu, who moderated a panel of chief diversity officers serving in the organization’s colleges and universities.

This year, AWIL’s registered participants came from 91 institutions of higher education and 75 CCCU schools. Bethel (Minnesota) and Judson (Alabama) were among the first universities outside of California to serve as satellite locations streaming the event live. Twenty colleges and universities organized book clubs to discuss Koehn’s work. Westmont’s Women’s Leadership Council generously covered the cost of the virtual event, making the invitation-only event free to higher education professionals and students.

The Mosher Center for Leadership and Learning at Westmont sponsors the Women’s Leadership Council, which was formed in 2016 to provide mentors for female students and joined AWIL this year. “Our most basic goal is to elevate the expectations, dreams and skills of our female students to equip and inspire the next generation of female leaders,” says Kirsten Moore, head coach of the Westmont women’s basketball team and director of the Women’s Leadership Initiative at Westmont. “There is no more important time than now to build up young women.”

“With the unprecedented and unpredictable challenges we face, it’s critical to reinvent our networking opportunities across the world with virtual platforms, allowing us to surpass the 600-800 professionals who typically attend AWIL in person. Attendees can now network and participate in interactive online workshops that encourage personal and professional growth on all college and university campuses because we know virtual engagement works well,” Neller says.