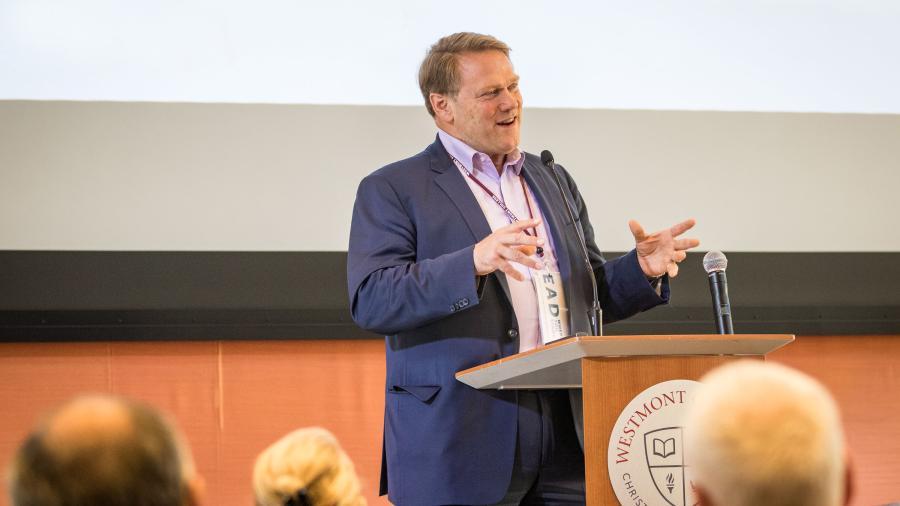 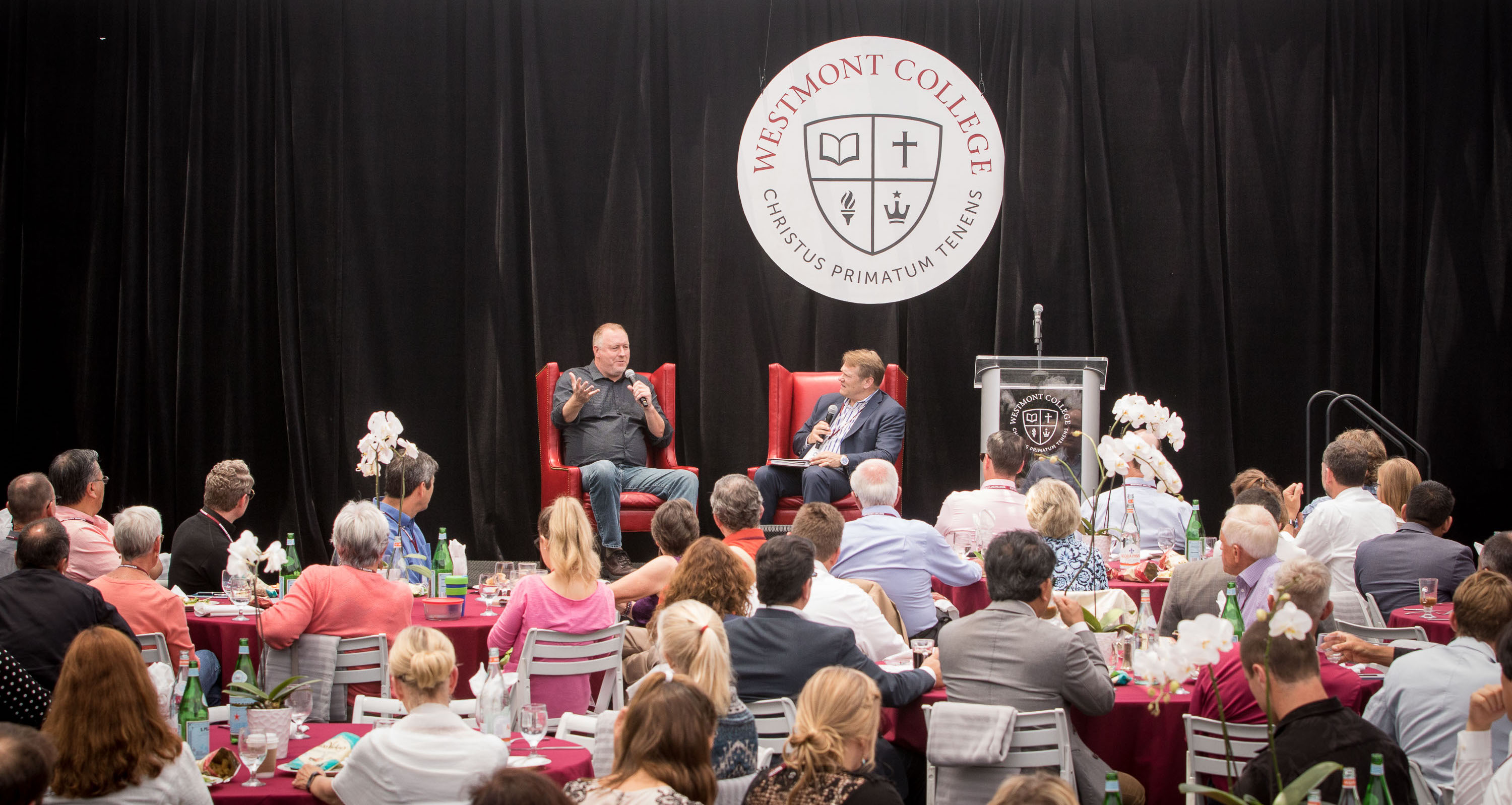 President Beebe interviewing alumnus Jon Walker at the Lead Where You Stand conference in June 2018. Read more below.

I’m delighted to announce the creation of the Center for American Democracy in the next year. A generous couple with new ties to the college has provided funding for this program.

The center will give students an opportunity to understand the unique ideas, ideals, institutions and practices that make up American Democracy. We often read about fledgling democracies where entrenched tyrants use the mechanisms of democracy to get elected only to dismantle the practices of democracy to assert their tyrannical will.

We’ll focus on understanding the unique and essential elements of American democracy.

Students will also read and discuss core documents, including the Declaration of Independence, the Constitution and the Bill of Rights, the Federalist Papers, and other contemporary and classic texts. They’ll serve as interns with local, state and federal government agencies, think tanks, and institutions committed to the common good. They can pursue guided research projects of their choosing in collaboration with select professors.

The center seeks to develop thoughtful and effective citizens who will enter public service, lead effectively, and model moral and ethical conduct and decision-making. Professors Jesse Covington and Tom Knecht from our Political Science Department will play a central role in the leadership and development of the program. 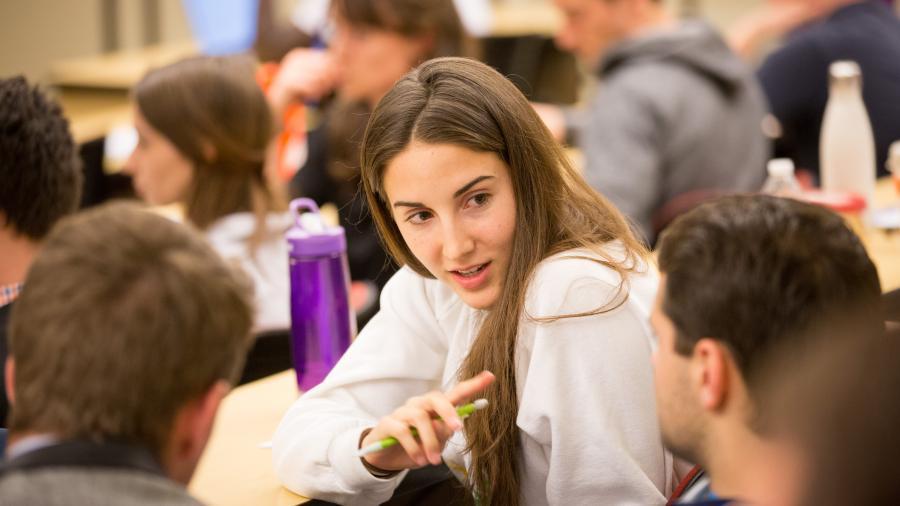 For several years, students and families have asked for a full-fledged engineering program at Westmont. Our popular 3+2 format has allowed students to get the best of Westmont in their first three years then transfer to one of three elite institutions to complete their degree, earning a bachelor’s degree from both Westmont and the engineering school. We’re working to make an engineering degree completely attainable at Westmont. Stay tuned for more information in the fall. 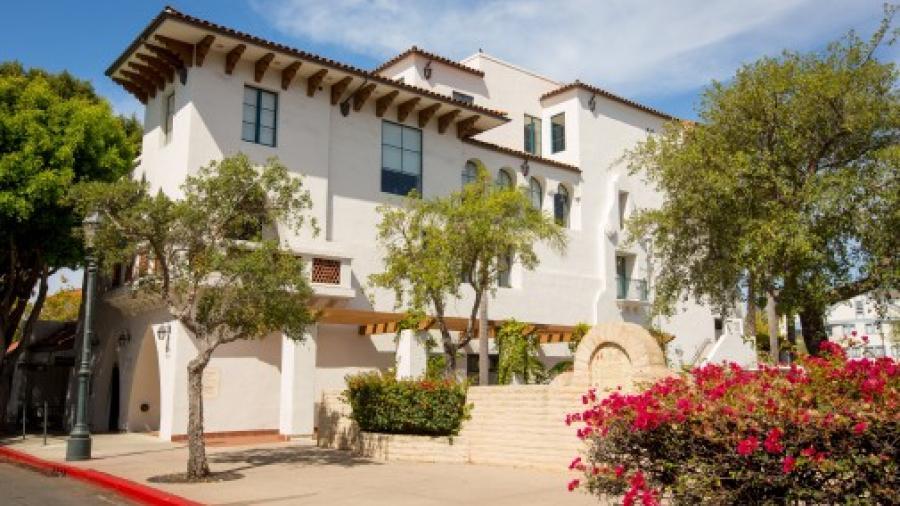 We continue to expand our offerings with our new major in data analytics, our new minor in global studies, our new minor in writing, and our ongoing work in social entrepreneurship, especially at Westmont Downtown, pictured on the right. For the first time ever, we launched a summer session abroad in Singapore. 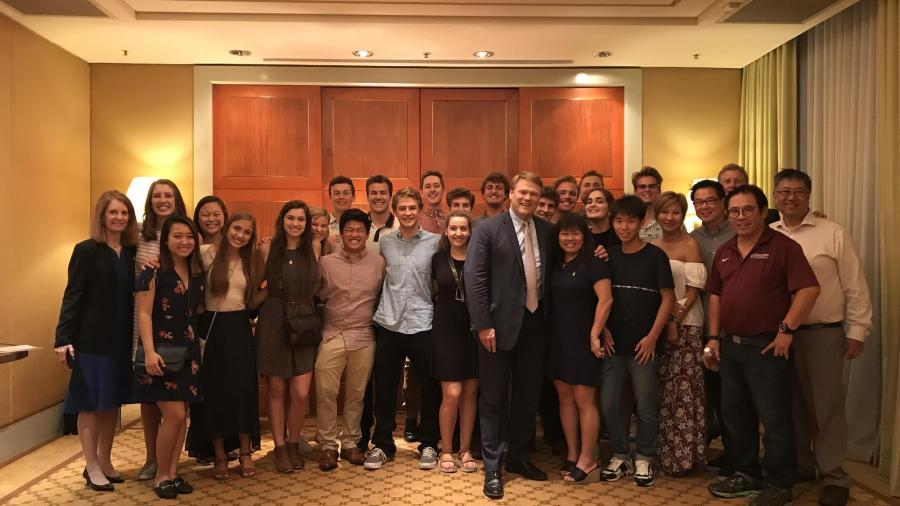 Westmont’s inaugural Singapore Summer Session finishes July 13. What an incredible opportunity to study international finance, global supply chain and ethical sourcing in one of the most dynamic economic and cultural regions in the world. I’ve been assisting Paul Bradford, the lead professor, in teaching and rolling out the program.

The first two weeks of the summer semester began on campus. Then, on May 18, the group headed to Singapore, their base. In between outings to Ho Chi Minh City, Hong Kong, Angor Wat and other Southeast Asian destinations, the students have been living and studying in Singapore while completing their internships at the Development Bank of Singapore (DBS). Lee Kuan Yew started this institution as the capital funding arm of his grand vision to grow the city-state when he became its first prime minister in 1965.

I spent a week there teaching with Paul, interacting with the students and doing some additional development work for the program. My trip coincided with the historic summit between the United States and North Korea on June 12, and I found it fascinating to read the accounts in the Singapore papers and talk to so many local people. They expressed great optimism that the summit could mark a historic turning in Asian history as the region grapples with the complexities following nearly a century of perpetual regional and global wars and the economic boom, bust and recovery that mark the last 30 years. They hope Singapore will play an increasingly robust role in the region and throughout the world. Read more about our Singapore program.

In fall 2019, women’s swimming will become an NAIA intercollegiate sport at Westmont. A generous donor has given $500,000 to establish the new program. Students have long requested that we add this popular sport, and I’m deeply grateful for the donor who has made this opportunity possible. I look forward to sharing more information about this newest Warrior team.

Planning is underway to launch a men’s and women’s golf team in fall 2019. We’ve received initial gifts to support the program. The Athletic Department is building a reasonable schedule and will soon begin recruiting.

Annual Leadership conference is a success

Our fourth annual LEAD Where You Stand conference drew a record number of participants and offered them outstanding and renown speakers with keen insights into leadership in the government, non-profit and for-profit sectors.

“A Day with David,” featuring David Brooks, the New York Times columnist, focused on the importance of character, transcendence and community. Brooks spoke hopefully about civic revival with hundreds of groups emerging to rebuild community and find meaning on the local level. He encourages us to build social capital and to remember that programs don’t turn around lives, relationships do—and society is a system of relationships. He believes societal change always follows personal transformation.

Doris Kearns Goodwin, the Pulitzer Prize-winning biographer, shared her latest writings on leadership in turbulent times, amplifying her remarks by focusing on key turning points in the lives of four U.S. presidents who responded effectively to the challenges of their challenging times. Asked whether presidents made any real difference or were simply products of greater forces that ruled their times, she noted how each of the four came back from personal tragedy and setback to rally the country during periods of real and eminent threat.

Lynda Weinman, who cofounded Lynda.com, spoke about starting and growing her business offering thousands of online courses. Completing her undergraduate degree at a liberal arts institution gave her a great feel for all the dimensions that go into starting, growing and sustaining a company that meets a real need in modern society.

In between our headliners, we featured nine professors and administrators and three alumni who addressed topics ranging from implicit bias to technology-driven innovation. I hope you’ll join us next June 5-7, 2019!

Summer gives us a chance to upgrade and enhance our beautiful facilities. In addition to renovating laboratories and classrooms in Whittier Hall with a generous grant of $750,000 from the Fletcher Jones Foundation, we’re installing a new roof on Kerrwood Hall, completely renovating Clark H, and teaming with conference services to expand the summer use of our facilities with the new Global Leadership Center.

Finally, if you haven’t visited for a few years, we continue to add new buildings and renovate existing facilities of what is arguably the most beautiful college campus in the world. If you make it to Westmont, please stop by. I look forward to greeting you when you visit.