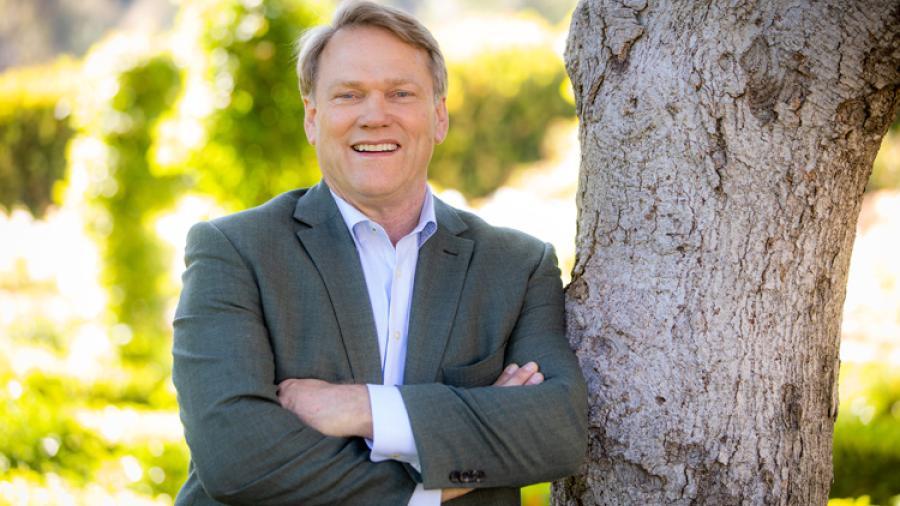 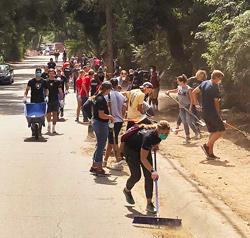 I love the energy on campus this fall, with students participating in a wide range of activities as well as their academic pursuits, including the arts, sports, service projects, student clubs, and many others. For example, more than 200 of our athletes helped repair the neighborhood path running the length of Cold Spring Road. We’re proud of our students who seek to serve the local community.

We welcomed alums back to campus for Homecoming 2019 and honored four stellar individuals at the annual brunch. 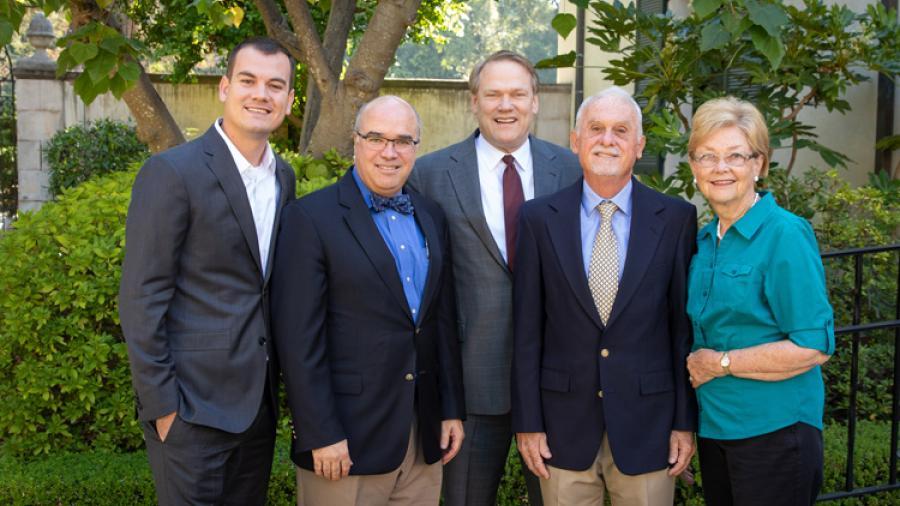 Erik Olson ’90, Alumnus of the Year, partner and trial lawyer at Morrison & Foerster

Leeba, who is battling cancer, missed Homecoming. A longtime Westmont volunteer and supporter, she serves on our Board of Advisors. She created CareMore, a highly regarded medical management and care model for chronically ill Medicare and Medicaid patients. She is the former president of the Southern and Northern California operations of PacifiCare, a health insurance company now part of UnitedHealth Group.

Eric’s son, Andrew, who graduated from Westmont in 2018 and now works for the college, delivered a wonderful and heartfelt tribute to his father, who has litigated major cases involving intellectual property, securities, and corporate governance disputes for clients in the biotechnology, medical device, telecommunications, and high-technology industries. His wife, Jill (Primuth) ’89, also graduated from Westmont.

The DeVries have shared a lifetime of marriage and ministry, raising three daughters who now serve on the mission field with the DeVries’ 10 grandchildren. They began their career in Ghana teaching high school and spent 20 years training pastors in Africa. In 2006, they moved to Cyprus to support missionaries in the Middle East. Jim and Sue continue to work with OCI from Colorado.

Scott, who was named to Forbes’ prestigious 30 Under 30 list in 2016, began delivering fuel through the Filld app to the Bay Area in 2016 and has expanded to Washington, D.C. While at Westmont, he participated in Westmont in Haiti, using microfinance to launch small businesses during spring break. He is married to Kylie (De Raad) ’14.

Charles Duhigg on the Science of Productivity 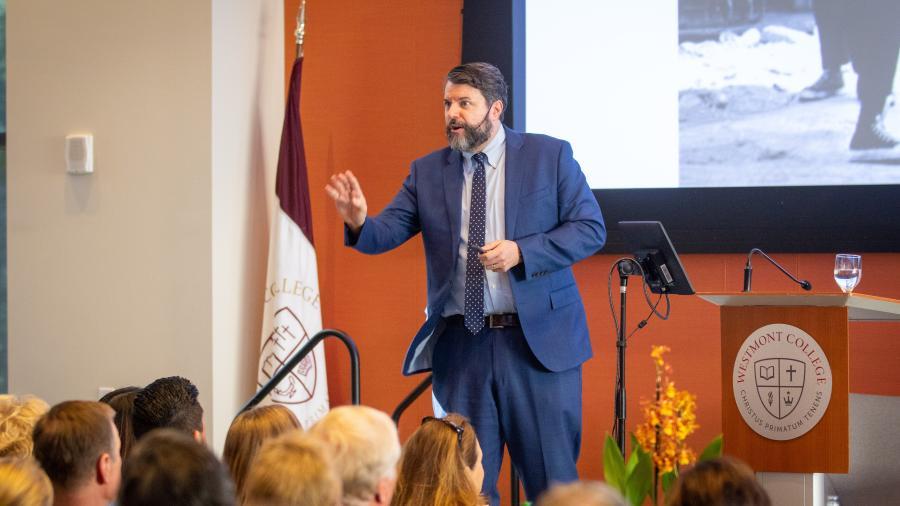 Last week, we welcomed Charles Duhigg back to Westmont. The Pulitzer Prize-winning New York Times reporter and bestselling author spoke at a Mosher Center for Moral and Ethical Leadership luncheon in our Global Leadership Center. The audience included our Presidential Fellows, who get to hear directly from the nationally known speakers we bring to campus. We enrolled the first group of fellows this fall, and they’re taking full advantage of the opportunities the program provides.

I recommend Duhigg’s best-selling books, “The Power of Habit” and “Smarter Better Faster: The Secrets of Being Productive in Life and Business,” which help us be more productive while achieving better balance in life.

Duhigg has written and contributed to multiple series as an investigative reporter for the New York Times business section, including “iEconomy” (2013), which won the Pulitzer Prize for Explanatory Reporting by examining the global economy through the lenses of Apple. 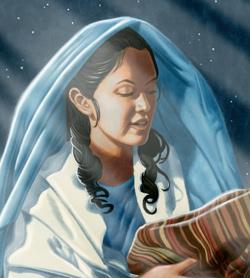 The Westmont Orchestra and our choral ensembles present a spectacular and inspiring musical production each year celebrating Christ’s birth. The 2019 theme, This Day, comes from Luke 2:11. If you live in the local area, I hope you’ll join us for this memorable concert Friday, December 13, at 7 p.m. or Sunday, December 15, at 3 p.m. Purchase tickets ($15 each) at westmont.edu/christmasfestival beginning at 5 p.m. November 7. 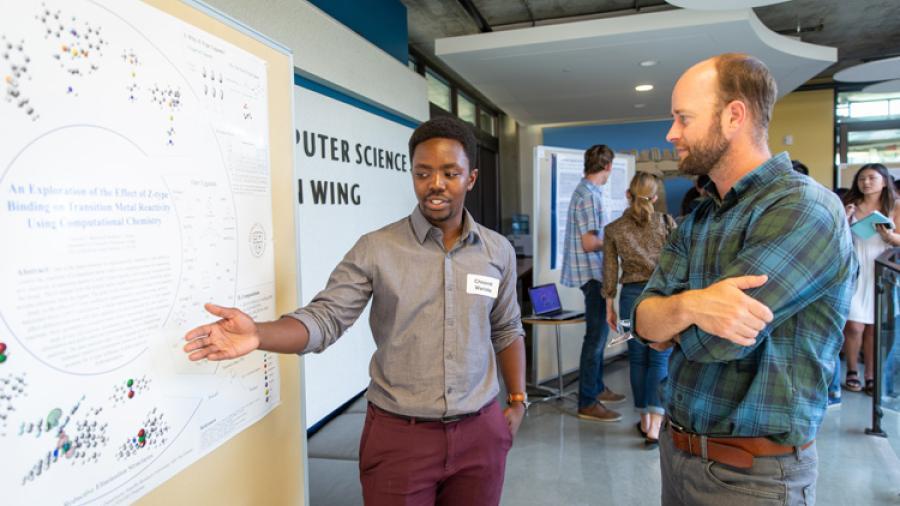 On October 11, students interested in STEM subjects attended our annual Summer Research Symposium to learn about opportunities to purse significant research on campus. More than 30 Westmont students who worked on 17 research projects during the summer shared their results. The wide array of topics included “Steps Towards Photocatalytic Destruction of a Difficult Pollutant,” “It’s About Time You Got Some Sleep!” and “Does Your Baby Have Moves Like Jagger? The Computer Can Tell You.” 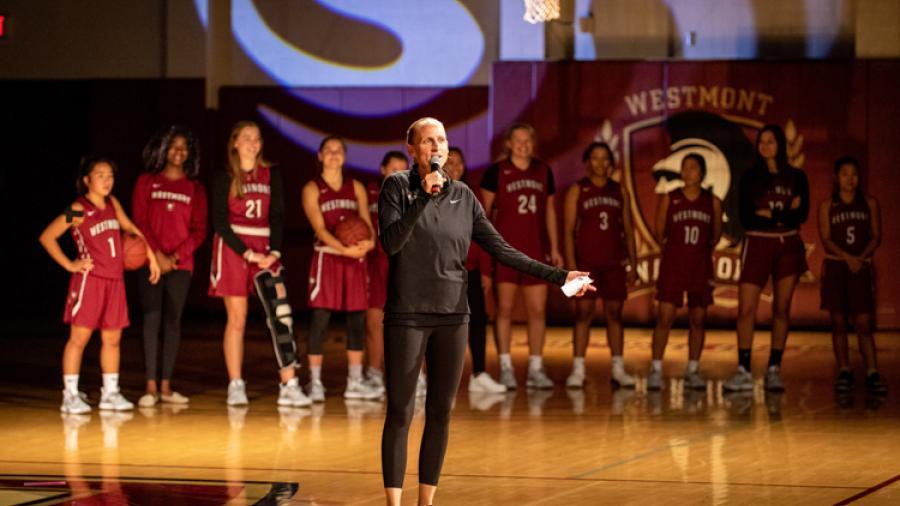 Each year, Westmont students kick off the basketball season by introducing the team and celebrating Warrior spirit at Midnight Madness. Prospective students joined in the celebration and excitement of this late-night event.

Do you know a high school student who might be a good fit for Westmont? Invite them to our last fall Preview Day November 10-11.

The opioid epidemic sweeping the country affects virtually every American directly or indirectly. The Westmont Initiative for Public Dialogue and Deliberation (WIPDD) hosted a community conversation on the topic October 24. Deborah Dunn, professor of communication studies, and Rachel Winslow, director of the Westmont Center for Social Entrepreneurship and assistant professor of history, created and began directing WIPDD in 2018 to encourage dialogue on challenging issues in the local community.

Using a framework established by the National Issues Forums Institute and specially trained student facilitators, these session raise difficult questions with no easy answers, described as “wicked problems.” WIPDD deliberations offer Westmont a wonderful way to serve the community as well as valuable training and experience for the students involved.

Honored by the new Beebe Plaza at Spring Arbor University 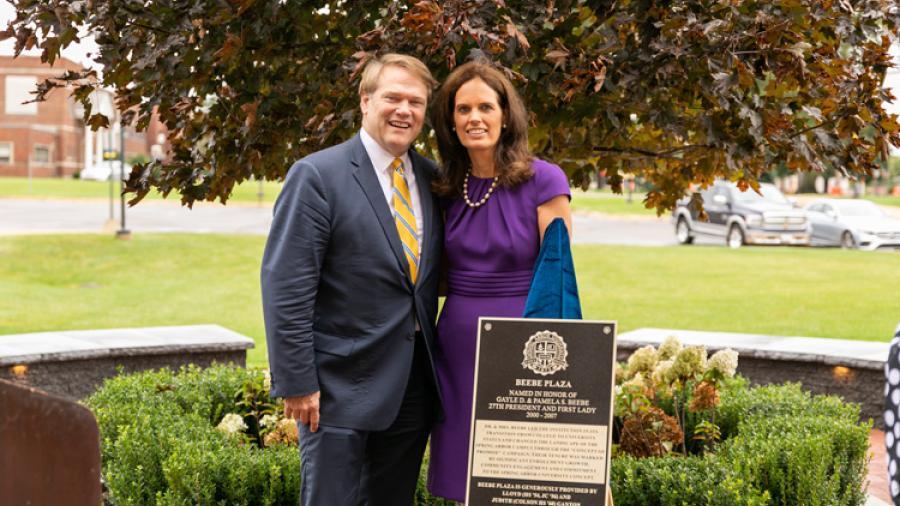 Late in September, Pam and I traveled to Spring Arbor, where we spent seven years, for the dedication of the new Beebe Plaza. We were greatly honored by this recognition of our leadership there. I’m delighted we were able to attend the ceremony.

I’m so thankful for the many ways our alums, parents and friends support the college. We greatly value our extended community and enjoy hearing from you. You’re always welcome on campus, and I hope to see some of you here in the upcoming months.