3 Things We Created and Learned in Summer 2020

After 15 weeks of coding and creating, blogging and bug-fixing, we’ve finally come to the end of the summer. Looking back at our successes, we’re struck by not only the concrete things we’ve accomplished but also the lessons we’ve learned. Through our work this summer, we’ve come to see the importance of knowing who our work is for, sharing our stories, and having a team mindset. In short, we do our best when we’re focused on helping others.

A Better System for Admissions 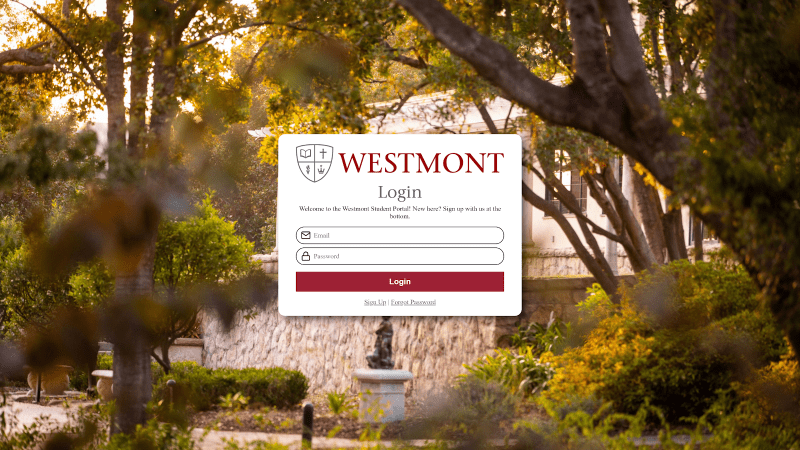 The big project this summer has been creating our very own application portal for students thinking of coming to Westmont. As this post goes out, we’re in the final stages of testing and bug-fixing. We can’t wait to go live in September and have real prospective students apply through what we built! Not only is this application portal our first external-facing project, but it’s also quite possibly the first significant interaction that many students will have with Westmont as an institution. Thus, it’s important that this interaction be a good one—and a good representation of Westmont as a whole.

We’ve worked hard to make sure that this portal matches the rest of our branding. When we demoed the portal to our admissions team, one of the things they were most excited about was how student-centric it was. The whole thing was built by students, for students. Our team lead, Sophia, pointed out that this project is a “showcase of the greatness of Westmont” because it’s a manifestation of what our students are capable of.

On the internal side, we’ve been creating and customizing all the tools our admissions team needs to do their jobs well, from an application overview to a custom search feature called the quick-entry form. Our counselor portfolio, pictured below, is a convenient, mobile-compatible tool for our counselors to view and interact with the records of all the prospects assigned to them. 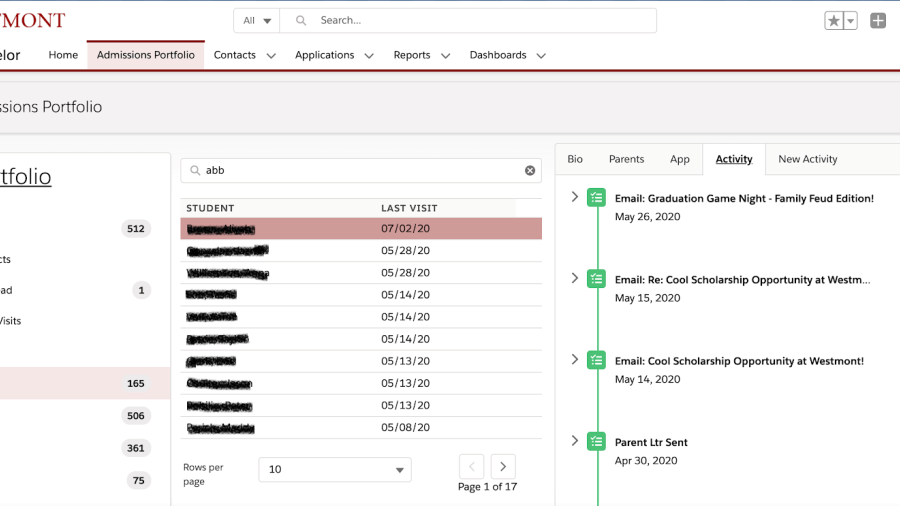 This portal and these tools are the result of not just months of coding, but also months of talking to the admissions team about what they needed and what they would like to see. Without their input and willingness to work with us, we would never have been able to create this new system. Reflecting on the work that he’s been doing this summer, our developer James shared that regularly meeting with the admissions team has helped him frame his own work. For James, working at the CATLab is about more than just writing code or fixing bugs. Even when he’s down in the details, he finds himself making decisions with more in mind than just the immediate problem at hand:

“How does the work you’re doing impact them, impact you, impact a bigger institution at large? To program, to create, to develop, to design something for another person—that’s the way I’ve thought about it.”

LESSON 1: Know who your work is for. Not only will you better meet and anticipate their needs, but you will feel more motivated to do your work well.

A Set of Resources for Others 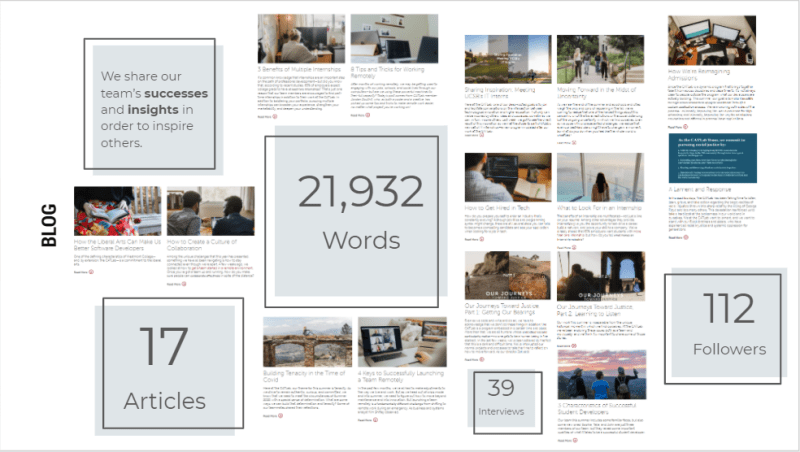 Another exciting development this summer was that our creative team doubled in size. Building on lessons we learned from last year and getting creative within the limits of being remote, we were able to take the lessons and the laughter, the setbacks and the stories, from our team and share some of that with the wider community. We also had the privilege of seeing how our sharing from last year has already begun to yield fruit in the UCSB student team that launched earlier this summer. (You can read more about the collaboration between our teams here).

While sharing our technical challenges and successes has been important, another key component this summer has been our conversations on racial justice. Our process has largely involved educating ourselves, listening to others’ stories, and sharing our own reflections in response. Our developer John Panos shared that although he’d known about systemic injustices before, getting to interact with personal stories put the issues in a whole new light. He said that he was particularly moved by the book we read as a team—I’m Still Here: Black Dignity in a World Made for Whiteness.

“It’s just so much easier to understand how prevalent white privilege is when you see it through the lens of a person of color. And because Austin Channing Brown is just an amazing writer, you just get sucked in to the stories and feel what she’s feeling—even though it’s impossible because I’m a white man and I can’t understand exactly what she felt—it gives me and people like me a unique glimpse into what it’s like.”

The perspective he gained from that book and from the other resources in the Justice in June curriculum has started to affect everything he sees and does. We as a team have experienced the power of individual stories, and that’s one reason our director has intentionally cultivated these conversations.

Another source of wisdom and input for our team this summer has been the guest speakers we’ve hosted. James shared that hearing these tech professionals’ stories inspired him to be more curious “not just about tech, but about how tech impacts the world around us.” Although previously he’d mostly been thinking of tech as simply a viable career path, this summer opened his eyes to how people could tie that career to goals beyond just making a living. Our guest speakers helped James realize that “you can actually integrate social justice into the work you’re doing through tech.” In brief, James said,

“I definitely am seeing more of the purpose of what it means for me to pursue a job in tech and the endless possibilities that are attached to that. That’s what CATLab has allowed me to think into.”

The conversations we’ve had within our team have expanded out into our personal lives, into the content we’re releasing, and also into our other circles of influence. As we move forward as a team and individuals, we hope to keep on listening to, learning alongside, and sharing with each other.

A Stronger Team for the Future 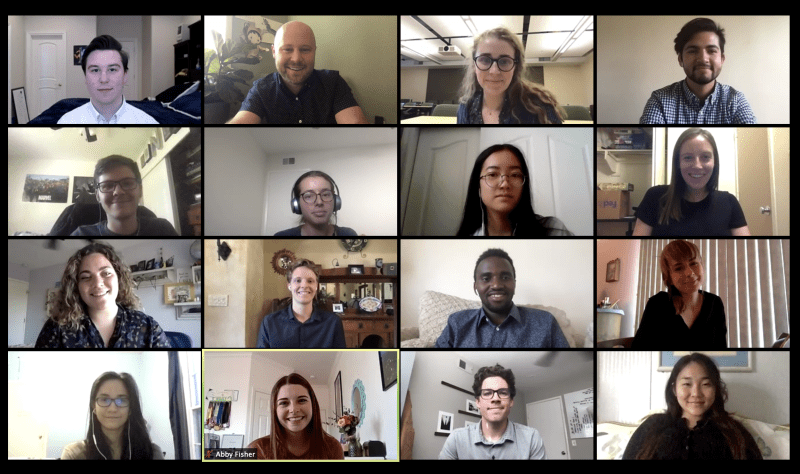 Although our most visible accomplishment of the summer is our new application process, the members of the CATLab seemed even more proud of the way we came together as a team and laid foundations for future success. During our end-of-summer presentation, Reed Sheard, Westmont’s VP for College Advancement and CIO was thrilled with what we’d built and shared his vision for how we could continue to improve the Westmont experience. We’re happy to be on a trajectory to tackle those challenges and continue building better systems.

We’ve come a long way from our beginning as a handful of students crammed into a tiny conference space. Zak shared his pleasure that the CATLab is “operating more like a tech company” now in terms of standardizing best practices, documenting our code and the changes we make to it, and certifying the developers who are part of our program. “We’re also getting better about sharing internally and saying “yes and” to each other,” said Zak. He mentioned that John’s work on the global styling sheet will make future updates to the portal much, much easier to manage. A big win, Zak shared, was that

“The CATLab is starting to think in terms of building blocks so that the members of the team can pass on a better coding environment to those that will come after them.”

John, for his part, thinks his biggest accomplishment of the summer has been getting comfortable with the code and figuring out how he could contribute to the team. “Everything’s a team effort,” he said, and he’s simply glad to have been part of it. John had done a lot of programming projects before joining the CATLab, but his previous work had all been individual or in small groups. Working with a larger team, however, has actually changed the way he writes code. Instead of just doing whatever it takes to fix a problem or achieve some functionality, John thinks, “When I write code, if someone a year from now has to make updates to it, how can I help them out to make it easier for them to understand?”

James, who has now been with the CATLab for over a year, has seen a lot of growth in himself and in the team. In tackling a variety of projects this summer, he said, “I’ve seen how well-rounded I’ve become with Salesforce.” Not only has he been able to contribute to the team through his own projects; he’s been able to lend his support to others. “I think we’re more established now as a team,” he reflected. “We’re able to pivot to other people’s projects as needed. And I think that’s what’s important—the legacy that we’re leaving behind as a team. It’s not so much me as an individual as the fact that I’m part of a team that’s leaving a legacy that will impact the college for the years to come.”

Our team lead, Sophia, highlighted the sheer volume of collaboration that we’ve had as a team this summer. At the beginning of the summer, she had worried about our ability to stay in touch while remote; but 15 weeks later we’ve sent about 20,000 messages on Slack, 92% of which were direct messages between members. Teamwork has been absolutely crucial to the CATLab. As Sophia said,

“Everything that goes into our system is not done by one person—it’s the product of many people and many minds designing together.”

Even one of our guests this summer, Gillian Bruce, a high-up person in Salesforce who is familiar with many different teams and how they use the platform, was struck by “how you all divide and conquer and work together.” She mentioned that often apps are built by people in isolation, “so it’s really cool to see the collaboration here—it’s so rare that we have a team of people with admin skills at a company working together on stuff like this.”

LESSON 3: Relying on and supporting our teammates helps you accomplish more than you ever could separately.

So, as we prepare to welcome a new class of students to Westmont through our custom-built portal, we’re proud of everything we’ve accomplished this summer. Our legacy includes a better system for college admissions, an ongoing conversation on justice, and a tight-knit team ready to take on future tasks. Along the way, we’ve come to see the importance of working with others in mind—and we hope that you have, too.