If you walk anywhere near the “Rep Room” at CATLab, you’ll hear them. Whether it's the clattering of keyboards, the buzzing of landlines, or raucous cheering as another student chooses Westmont, CATLab’s brand new Admissions Development Representatives (ADRs) bring an effervescent approach to revolutionizing college admissions. 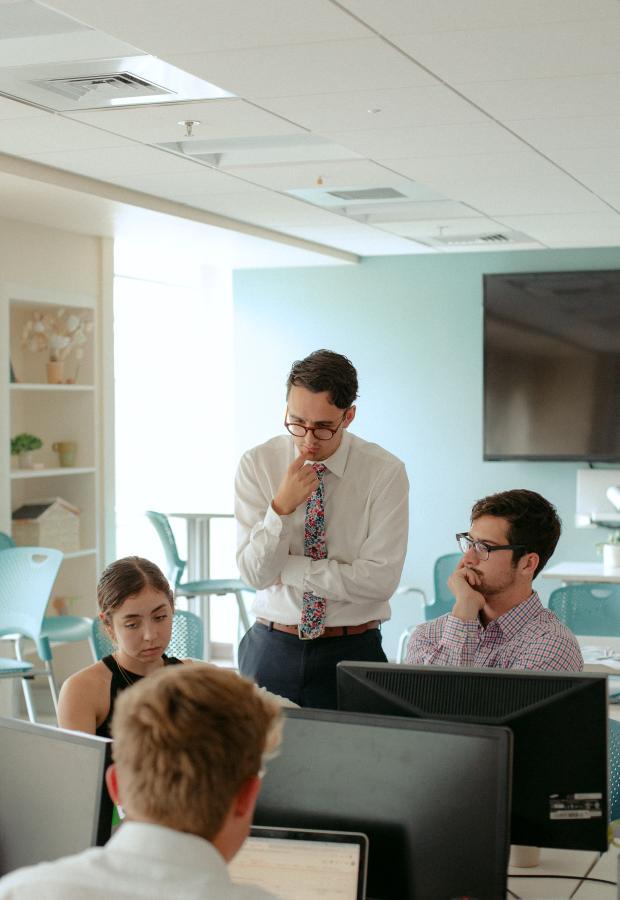 The brainchild of Korbin Breeden, Westmont’s communications strategist, the ADRs are a student-led admissions team. Similar to Business Development Representatives, the ADRs work alongside admissions to recruit new students to Westmont.

As CATLab’s de facto sales department, the ADRs leverage our Salesforce database to connect Westmont and prospective students. The team experiments with texts, calls, emails, videos, and in-person events to determine the best way that Westmont and CATLab can serve future students. Together, they are innovating admissions and building strong relationships with high schoolers through an informal, relational, personalized, and embodied approach.

Connor Hess, a rising Junior on the ADR team, shared that “the traditional and formal way of selling colleges doesn't land well anymore. We’re in an age of disinformation and people delete emails if they look like they’re from a company. We want to grow and maintain relationships, but it’s hard if we can’t reach people.” For Connor, breaking through student’s skepticism of corporate marketing “involves informality, which is something admissions can’t do, but students can.”

One way that the ADR team establishes connections with students is through informal contact methods. Instead of sending corporate form emails, the ADRs send mass texts and emails directly from their personal accounts. Prospective students can tell that these messages were sent by real people and respond well: informal emails get higher click and reply rates than standard marketing emails. 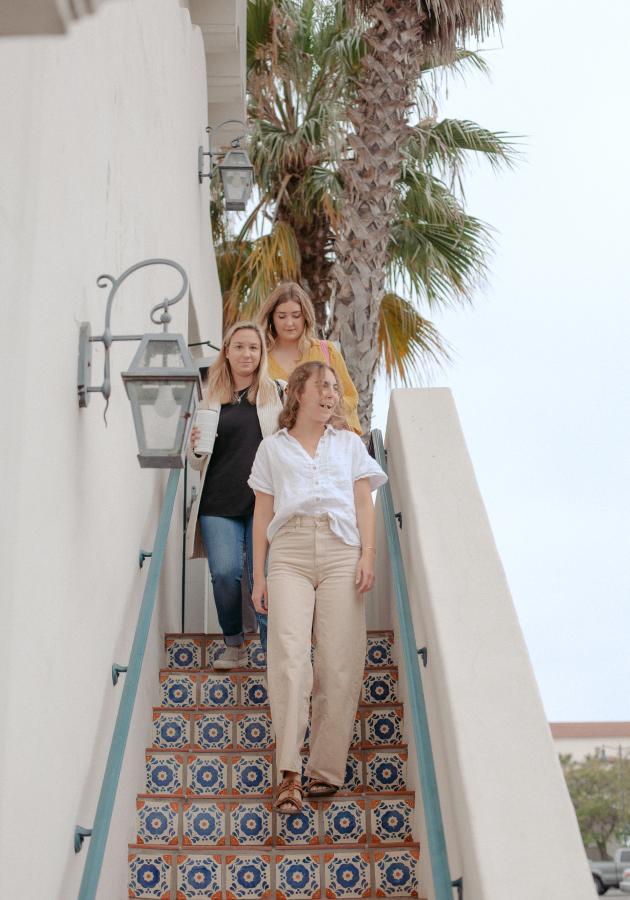 Text messages do even better: ADR Kaylie Jerdal explained that “high schoolers are much more likely to respond to a text than an email…We want to be approachable, and want them to feel like they can text, call, or contact us whenever."

Often, informal connections lead to holistic relationships. ADR Frannie Guida enjoys that she can approach students as a friend interested in learning about them.

“Once, I called a student who was making mac and cheese. We talked for almost an hour, as he walked me through the steps of his recipe for mac and cheese. He shared that he wanted to be on the Food Network, and I told him that I used to want to be on it too. He even sent me his Tik Tok cooking videos.”

The best part of making friends for her job, Frannie said “is knowing that as a current student we’re going to get to continue the relationship afterwards if they come to Westmont.”

Relational: “Here for you because we were you.”

ADR Joseph Chandra appreciates the opportunity to build deep relationships. “Our job as ADRs extends way past just making sure students feel welcome. We’re encouraged to ask how they’re doing and try to relate to them on a deeper level; not only does this market Westmont in a positive light, it makes us see that these people aren’t just names on a Salesforce list— they’re real people with real stories.” 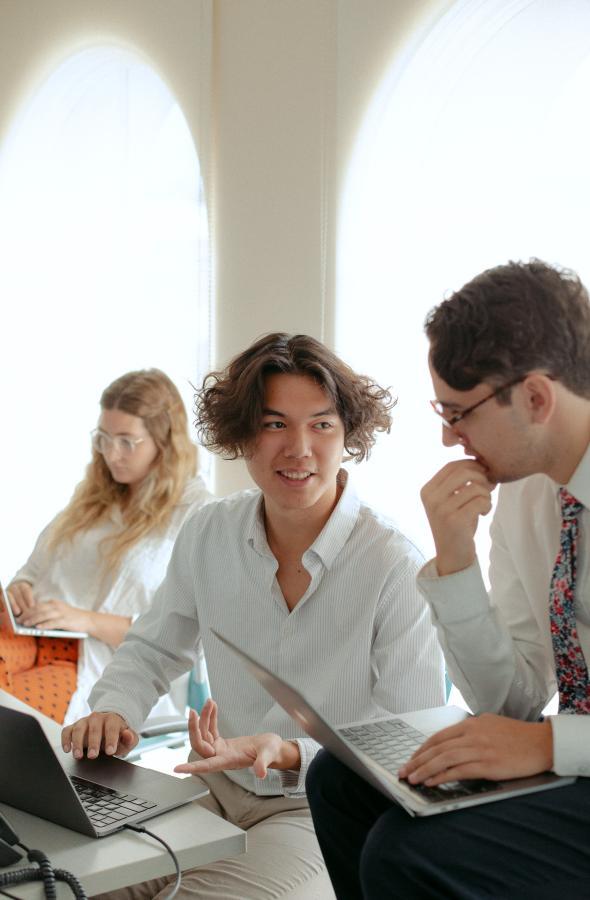 Because the ADRs are Westmont students, they are able to interact with prospective high schoolers in ways that admissions counselors cannot. When students realize that they are talking to a college student, someone just a few years older than them, they open up quickly. Connor said that students often tell him “I genuinely don’t know what I’m doing. You went through this, can you help me?”

Similarly, Joseph explained that he empathizes with students because he remembers the excitement and nerves he experienced as a prospective student himself. “A lot of these students really appreciate hearing a voice offering help and reassuring them that everything will be okay. I’m so happy to come into my job each day, and extend a posture of empathy towards these incoming students.”

By fostering an empathetic culture, the ADRs are able to connect deeply with prospective students. Kaylie explains that the team intentionally balances hitting admission targets with relationships. “We have goals based on data and numbers, but often the things we celebrate are good conversations with students and personal connections.”

Kaylie calls the ADR team “the most personalized way of connecting with students that Westmont has ever utilized.” Many high school seniors are focused on getting into college, but ninth graders are not thinking about it much. By personalizing events, communication, and programs based on age, the ADR team can better serve student’s individual needs.

Traditionally, admissions counselors focus on uncommitted high school seniors, but younger high schoolers don’t receive much personal attention. According to Korbin, the ADR team brings a more balanced approach to admissions by reaching out to first and second years. “We want to help students think about college early, so they don’t have to stress about the application when they are a senior.” 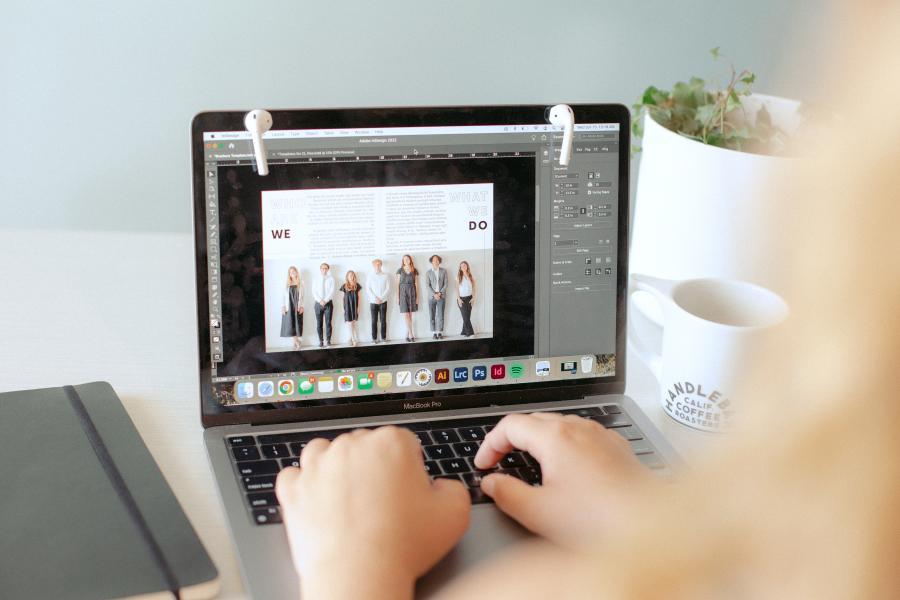 Because most admission departments are focused on increasing enrollment, committed seniors don’t get many resources to help navigate their transition from high school to college. The ADRs walk students through the Westmont Roadmap, an online program developed by Westmont admissions and IT to streamline new students’ transition to campus life. Instead of a confusing barrage of emails, incoming students can refer to the Roadmap hub for well-structured information on everything from course registration to housing. 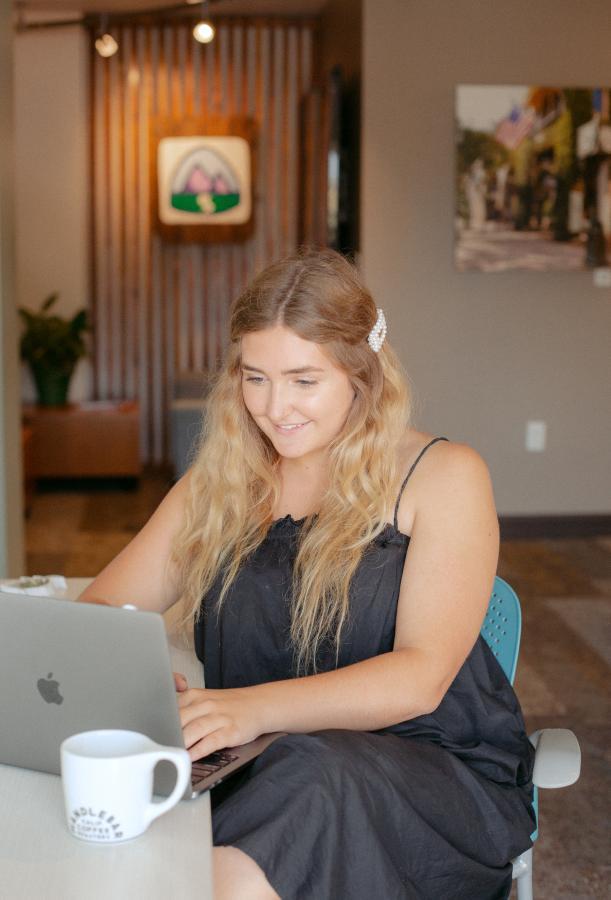 As a team, the ADRs embody the informal, relational, and personalized aspects which they bring to their work. The team keeps work lighthearted and fun, celebrating each other's successes.

ADR Lexi Malone appreciates the way the team cares about one another. “One of the most special aspects of CATLab is working alongside other Westmont College students. CATLab helps us connect with classmates and build work relationships with people our own age, making it fun to work, but also pushing me to work harder.”

After a particularly successful call or milestone, the team erupts in applause. Ringing through the office, their cheers encourage our whole team. Why do they clap? Connor says it’s because “we really want people to come to Westmont, because we think they'll love it as much as we have. We’ve had great experiences and we think they will too.”

Keep learning with us!