We had a great time in San Francisco last week. Early on Thursday morning, we started our drive up from Santa Barbara. After a breakfast stop at Chick-fil-A, we visited Egnyte, a cloud storage and file sharing company whose software we use at Westmont. That afternoon, we headed into San Francisco proper, where we got to tour Cisco Meraki. We spent the night at the Clunie House, the Victorian mansion that provides housing for students on the Westmont in San Francisco program. On Friday, we spent the morning at the Salesforce Tower, where we got to go all the way up to the Ohana Floor. From there, we walked a few blocks to the Samsung NEXT office and spent a couple hours talking to a few of its employees. During our brief stay in the city, we got to eat great snacks, visit incredible buildings, and meet eminent professionals. Check out our video, and then read our highlights from the trip! 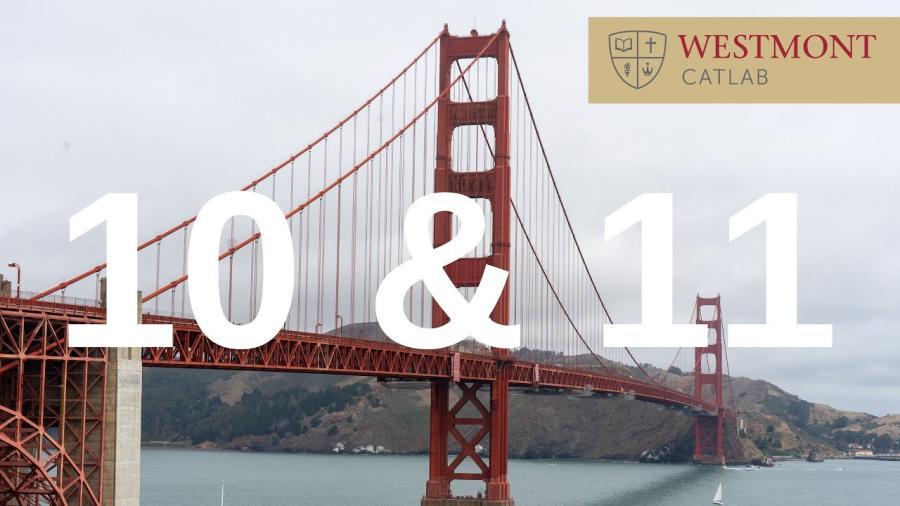 I appreciated hearing from Egnyte’s founder and CEO, Vineet Jain, about running his own business, the hardships of figuring out problems, hiring people, and getting people to work together. He said one of the key things for starting a business is to find partners that, when you run into a problem, you can lean on them, they can lean on you, and there’s a support structure.

Something that stuck out to me was the way they talked about “pulling people” to the company. Bigger companies have a lot of "sizzle" to draw people in. People want to work for Google, Apple, Amazon… bigger companies like that. Being a smaller company, trying to find good people to hire is challenging.

Going to this company showed me possibilities for my future also what to expect about being hired. I got to see a company with more steak than sizzle. I guess I’ll be looking at the depth of a company, what’s underneath, not so much their bells and whistles. I realized that smaller companies are also a good place to go to because they’re growing. There’s room for working your way up and growing your knowledge and connections in smaller companies as well as large ones.

I hadn’t toured any really, really big companies before, so visiting Cisco was my first time seeing what it was like inside one. I don’t think I had any idea of how people at this scale of a company interact. Before this, I thought I would work at a smaller company because I’m mission-driven and I want to be able to contribute to what the company’s doing at a meaningful level.

But listening to the people at Cisco, I definitely had a sense that they could make their own mission and their own purpose in their jobs, even though they were at a larger company. Beforehand, my impression had been that you would get swallowed up. I definitely see the benefit of having a larger company with all the resources behind you—resources that give you the ability to move where you want to go.

There’s a lot of stigma against millennials for not staying with a job for more than two years—it’s a stereotype. I've sometimes thought maybe we should stay longer because it's a symbol of commitment. But hearing from professionals who have actually gone through these changes, the expectation now is, "if you’re not doing something new, you’re not developing yourself." I find that perspective very interesting.

It was also great learning the concept of a Sales Engineer—someone who’s on the sales team and talks with customers but who also develops. I definitely thought a developer position would be more internal and that it would be the project manager who communicates with the client. Seeing that you can still code a lot but also get direct feedback from a customer has opened more ideas for what I want to do.

I had an amazing experience at the Salesforce Tower in San Francisco. We got to interact with over ten engineers, programmers, and executives to get a glimpse of what it’s like to be a part of the team. We went to the very top floor (known as the Ohana Floor) and saw the city from a new perspective (and the highest point in the city). I also got some cool aerial footage of the skyscraper!

In my interview with Salesforce’s VP of Executive Engagement, Mark Dickey, he shared how important it is for businesses to have a deep understanding of their customers. Innovation and creativity is so important, especially in tech industries today.

Lead Solution Engineer at Salesforce, Emilio Reyes Le Blanc, shared his journey of coming to Salesforce and how he was rejected from his first job despite his phenomenal interviews and presentations. The rejection fueled his passion, and he applied again and got a better position. Emilio encouraged us by saying, “When people don’t make time for you or tell you ‘no’, it is not because they don’t like you. Sometimes it’s because they actually don’t have time. So keep reaching out.”

My biggest takeaways from Salesforce were:
1. Follow through even when you are rejected
2. Invest in things that you love
3. Always block out time for creativity

(Note: This reflection was re-posted from Clayton's LinkedIn account with his permission).

James at Samsung NEXT

It was really cool meeting all four of the individuals we spoke to. I think the most fascinating of the four would be Vlad, the Design and User Experience Researcher. He had a lot to say about how to develop a successful product. I thought it was very useful to hear all that he had to say about iterative refinement in designing a product.

Hearing from Rachel and her side of taking a year off was more down-to-earth. But wow—she definitely took a lot of stress off our backs, or at least my back! I realized it doesn’t have to be continuously growing success: You can take breaks to realign your focus or your goals. Not “I just have to do what everyone around me is doing,” but more like “What do I feel passionate about?” and realigning those goals, ideas, desires.

Speaking with Dennis and hearing his take on building a data team has started to shift the way I think about data analytics. People usually think data analytics is all about machine learning, deep learning—but hold up! There’s actually more that needs to be done, like even just getting data together in an architecture and a database. Being able to build models goes after that, and then machine learning or deep learning is the very last thing. It was cool to see how he’s still in the early process of building his data team.

Also, I think the overall culture of Samsung NEXT is really cool. It reflects a lot of what we’re doing here at the CATLab: building a product for somebody, but without the pressure of a big corporate environment like Salesforce. I really thought they had an environment that reflected being a start-up, which is what they are. It was cool to see their unique style.

Visiting Samsung NEXT really made me consider the type of work culture and how big of a company I want to be in. Another takeaway is that now I definitely have a goal for myself as I finish my four years at Westmont: I want to write software or build a software program for a company. I’m not sure what it will be yet, but I think I have the basics of user experience and product design. That’s what I really took away—how to go about the early process of building something.

Want to keep up with all of our adventures? Follow us on social media:

Learn about our events:

Be a Multiplier  Enabling Impact